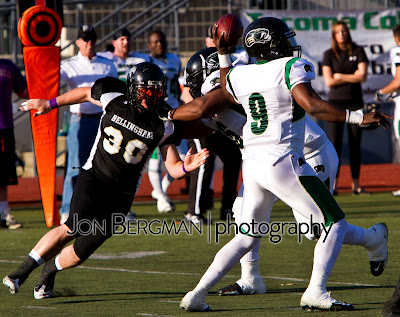 Bellingham squared off against their long time nemesis the Tacoma Cobras Saturday, May 12th at Civic Field. The Cobras got the best of the former Blitz team in back-to-back Professional Developmental Football League championship games in 2009 and 2010. Tacoma would prove to be this united Bellingham team's greatest challenge to date.

The Bulldogs' offense stumbled out of the gates causing them to punt twice, giving the Cobras a short field and leading to two quick strikes for touchdowns. Bellingham's defense could not find an answer for the Cobras' offense as a combination of running and passing attacks put Tacoma up by four touchdowns. Tacoma's defense kept the pressure up blanking the Bulldogs' offense through the first half. A blocked punt and recovery by Bulldogs' cornerback Chris Johnson scored their first touchdown of the night.

Bellingham's defense came out at the second half swinging, forcing the Cobras' offense to give up the ball at mid-field. The Bulldog's offense took advantage, driving the ball down for a touchdown and a two-point conversion. Bellingham's defense continued to torment Tacoma's offense. Lead by defensive end Chase Cantrell, the Bulldogs' defense forced two fumble recoveries, but the Bulldogs' offense failed to capitalize with scores.

A late rally by Bellingham put Tacoma on their heals as the Bulldogs' defense kept pushing the Cobras all over the field. The comeback was well established when quarterback Cody Oakes connected with wide receivers Jesse Dellinger and Douglas Miller for touchdowns to tie the game at 28-28 with 5:27 left in the fourth quarter. After a blocked Cobras' field goal attempt the Bulldogs had all of the momentum, but a fumble recovery lead to a quick one-yard run for a Cobras' touchdown. Oakes tried one last time but an interception spoiled the comeback as Tacoma continued their winning ways over Bellingham. Final score: 28-35. Click here to view photos of the game.
Posted by Jon Bergman Photography
Email ThisBlogThis!Share to TwitterShare to FacebookShare to Pinterest