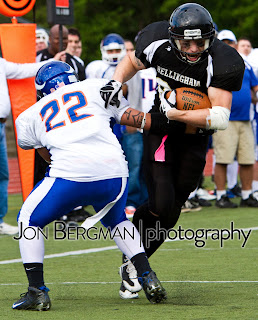 Bellingham hosted long-time opponent the Snohomish County Vikings at Civic Field Saturday, June 2 for their eighth game of the 2012 Pacific Football League season. The Bulldogs defense set the tone early, dominating the line of scrimmage and punishing the Vikings offensive line. Snohomish County's first three offensive possessions ended with a fumble recovery by the Bulldogs on the one-yard line, an interception off of a deflected pass and a nearly blocked punt. All resulted in a Bulldogs' score. Before the Vikings could catch their breath the score was 24-0 in the second quarter.
The Bulldogs defense was so stifling that it took a fumbled punt return for the Vikings to get into scoring position, turning the opportunity into a touchdown. Snohomish County continued to struggle under the suffocating pressure, relying on the scarce Bulldog miscues for opportunities at points. Bellingham's offense took advantage and quickly put the game out of reach. Moving the ball effortlessly with their running game. Once the Vikings' defensive backs were caught looking inside the Bulldogs threw over their heads, scoring 32 unanswered points. Final score 65-10. Click here to view photos from the game.
Posted by Jon Bergman Photography
Email ThisBlogThis!Share to TwitterShare to FacebookShare to Pinterest