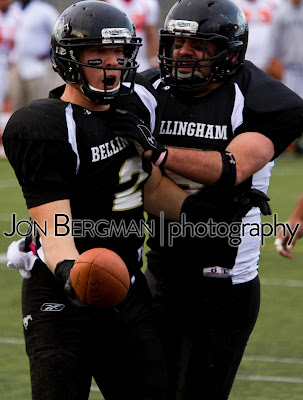 The Bellingham Bulldogs took on the South Sound Shockers in their second regular season game of 2012 at Civic Field Saturday, April 21st. The Bulldogs offense started sluggish, calling on their defense to ignite the Bellingham football engine. The Dog's D did not disappoint. Flexing their front-line muscle the Bulldogs forced the Shockers to punt out of their own end zone, providing the Bulldogs offense with a short field to operate. After quick strike from Cody Oakes to Toby Seim for a touchdown, the pedal was pushed to the floor. A fumble recovery on the next Shockers possession by the explosive Dog's D gave Bellingham's offense another short field but penalties cut the drive short. The Shockers stumbled to their feet and threw a 61-yard bomb down field for a touchdown. Determined to not let the Shocker score again the Bulldogs defense stiffened and pushed the Shockers around the field, allowing the Dog's O to open up the throttle and score 41 unanswered points. The Bulldogs defense also added a score of their own with an interception return of a touchdown by Miguel Pierre. The Shockers did not score again until mid-third quarter. In the end the Dog's defensive machine was too much for the Shockers to overcome. Final score 53-12. Click here to view photos of the game.
Posted by Jon Bergman Photography No comments:
Email ThisBlogThis!Share to TwitterShare to FacebookShare to Pinterest 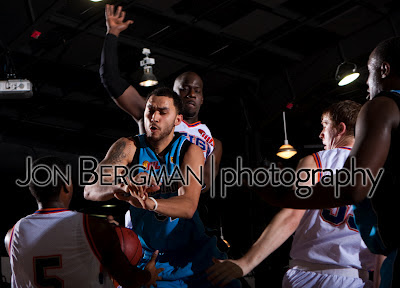 The Bellingham Slam opened the 2012 International Basketball League season against the Olympia Reign at the Skookum Events Center in the Little Creek Casino Resort Friday April, 20th. The beautiful new court was the perfect stage for both teams to showcase their talents. The Reign set a fast-pace with 11 steals leading to to 20 points. The Reign aggressive defense also lead to 34 points for the Slam from the free-throw line, keeping Bellingham in the lead the majority of the night. Morris Anderson lead all scores with 28 points, propelling the Slam to their first victory of the season. Final score 133-104. Click here to view photos of the game.
Posted by Jon Bergman Photography No comments:
Email ThisBlogThis!Share to TwitterShare to FacebookShare to Pinterest

United Under One Banner 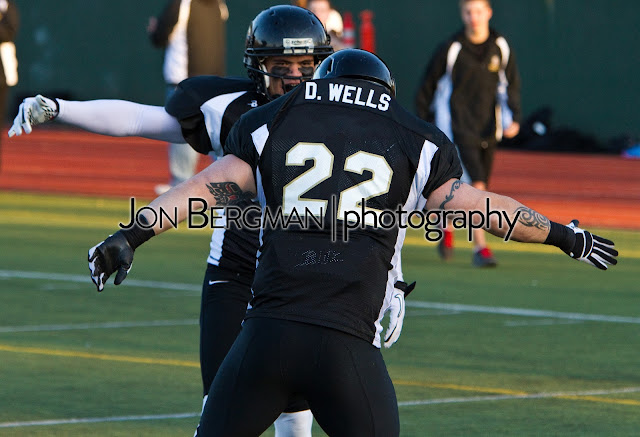 A perfect day to showcase the long awaited partnership between the two Bellingham football squads, the Blitz and the Bulldogs. This united football front was spearheaded by owner and co-head coach of the Bulldogs, Phil Smith. He recruited the talents of fellow coach and former head coach of the champions Bellingham Blitz and Whatcom Raiders, Brian Young to lead the offense of this football cooperative. This game could prove be to be a glimpse of the greatness these two field generals can accomplish in the 2012 season. The Bellingham Bulldogs opened the 2012 Pacific Football League season squaring off against a familiar foe, the Renton Ravens.

The Bulldog offense started hot, taking the opening drive down for a touchdown with a mixed running attack from their backfield. After a turnover in the Ravens' redzone the Bulldogs turned the change of possession into a quick strike, a 40 yard-run for a touchdown. Following the score the Bulldogs surprise the Ravens with an on-sides kick recovery. The Dogs marched down the field once again but the offense stalled. A strip fumble recovery for a touchdown by a swarming Dogs defense set the tone for the rest of the game.

The Ravens offense struggled to keep a consistent rhythm under the constant pressure of Phil Smith's relentless defense. This allowed the Dogs offense to open up and push the pedal to the floor. Striking from the air on the arms of quarterbacks Cody Oakes and Leon Lilley as they split quarterback duties between halves. The Bulldogs made a statement to the rest of the PFL and showed Bellingham that a united football club is twice as determined for greatness. Final score 50-0. Click here to view photos form the game.
Posted by Jon Bergman Photography No comments:
Email ThisBlogThis!Share to TwitterShare to FacebookShare to Pinterest
Newer Posts Older Posts Home
Subscribe to: Posts (Atom)