Bulldogs Back On Top 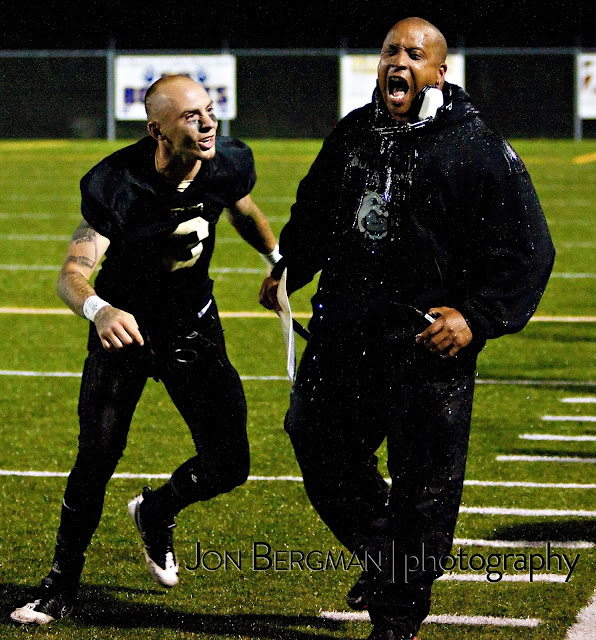 A light mist blankets the surrounding hills that overlook the Stewart Field Complex in Aberdeen, Washington. The cool ocean air quiets the landscape bringing a calmness prior to the impending storm. The Bellingham Bulldogs, having conquered the Pacific Football League North Division, traveled to this sleepy bay-side town to claim their right to the League title. Boasting a 10-2 record the Bulldogs seemed assured certain victory against their South Division opponents, the South Lane Buzzards.

The surging Bulldogs defense washed over the Buzzards like a rouge wave. Pushing South Lane back and forcing an early punt. The Bulldogs offensive line took advantage of their size and moved the ball with a combination of runs by Brett Hall and a quick strike to Toby Seim to score the first touchdown of the game. Momentum continued to favor Bellingham as a recovered fumble lead to another scoring drive, caped again by a pass from Eric Taylor to Toby Seim.

The bruising running attacks and quick passes kept the Buzzards on their heals. Trying their bests to hold back the waves of offense with little success as Bellingham scored twice more in the second quarter. Once in the air with a 12-yard pass to Nicholas Gavigan and then a crushing 92-yard touchdown run by Brett Hall. Throughout the first half the Bulldogs defense remain dominate, keeping the Buzzards from scoring a single point.

Bellingham started the second half a little sluggish. Miscues, fumbles and interceptions kept South Lanes' hopes for a comeback alive, but Bellingham would not recede. Adding another touchdown drive with a 12-yard scoring throw to Douglas Miller.

The Bulldogs however were not to get their perfect shutout. After a favorable kick return the Buzzards connected on a 44-yard pass to put them on the one-yard line. Two plays later South Lane found the end zone for their only scoring drive of the game.


The last laugh would belong to the Bulldogs when back-up quarterback Noah Clein found Nicholas Gavigan with a 39-yard touchdown throw. Sealing the game and the 2013 PFL Championship. Final score: 40-7. Click here to view photos of the game.
Posted by Jon Bergman Photography No comments:
Email ThisBlogThis!Share to TwitterShare to FacebookShare to Pinterest
Newer Posts Older Posts Home
Subscribe to: Posts (Atom)