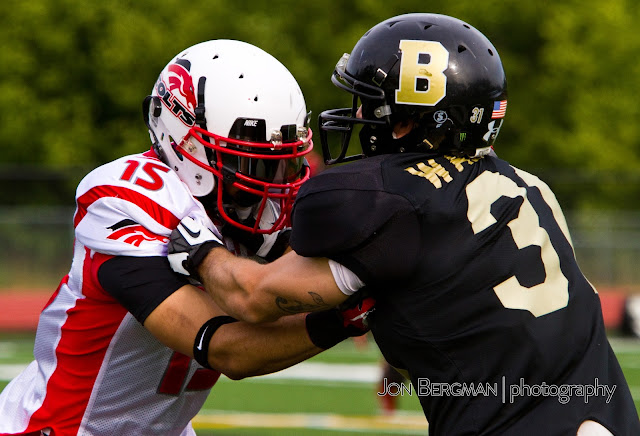 
Cody Oakes and the Colts would not secede. Clawing their way back into the game, Oakes lead his Colts to two more touchdowns and brought the game to a 37-30 score with 3 minutes left to play. The Bulldogs defense would bend but would not break. The Colts drove deep into the redzone but with one minute, thirty seconds remaining Bellingham stopped the Colts drive short. Holding onto victory and keeping their home-playoff game hopes alive. Final score: 37-30. Click here to view photos of the game.
Posted by Jon Bergman Photography No comments:
Email ThisBlogThis!Share to TwitterShare to FacebookShare to Pinterest 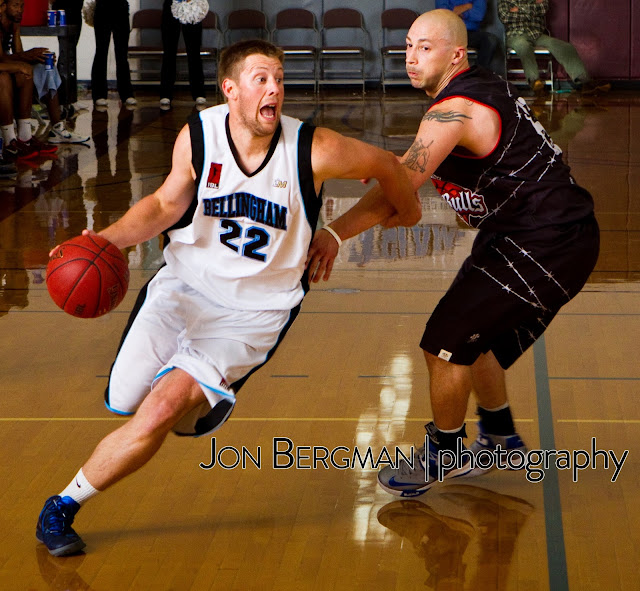 The International Basketball League witnessed another victory for the Bellingham Slam as they crushed the visiting East Bay Pit Bulls from Livermore, California at Whatcom Pavilion Sunday, June 9th. From the opening tip the Slam controlled the tempo and the scoreboard. Averaging a double digit lead in all four quarters, Bellingham cruised to a tenth straight victory and sit alone atop the IBL standings. With six games remaining on the regular season the Slam look forward at the opportunity to defend the IBL Championship title. Final score: 153-100. Click here to view photos of the game.
Posted by Jon Bergman Photography No comments:
Email ThisBlogThis!Share to TwitterShare to FacebookShare to Pinterest 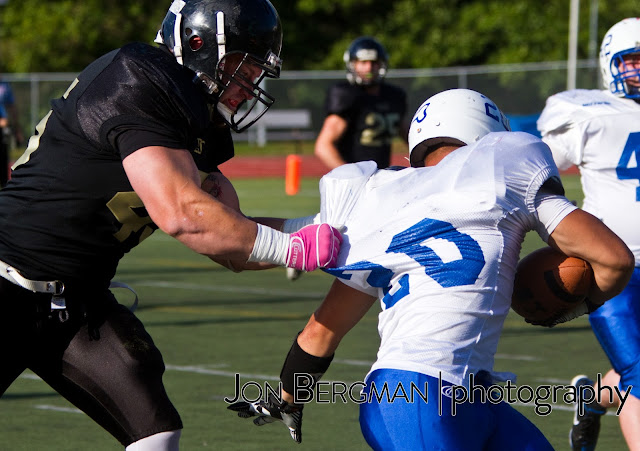 
Late in the fourth quarter the scoring drought was quenched when Bulldogs' defensive back Jon (Bizzle) Bon recovered a fumble and returned it for a touchdown. The Buzzards' defense also saw the end zone as defensive back Jamil Wynn picked off a pass from Leon Lilley and returned it 70 yards for South Lanes only touchdown. Bellingham would get the last word with less than two-minutes remaining and the Buzzards driving the field. Bulldogs' safety Miguel Pierre intercepted a deflected pass, sealing the victory for Bellingham. Final score: 14-11. Click here to view photos of the game.
Posted by Jon Bergman Photography No comments:
Email ThisBlogThis!Share to TwitterShare to FacebookShare to Pinterest
Newer Posts Older Posts Home
Subscribe to: Posts (Atom)