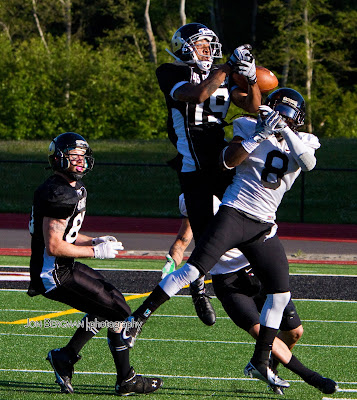 Songbirds and the sound of football fill the air at the beautiful sun-soaked Lummi School Field as the Bellingham Bulldogs welcome the visiting Portland Raiders Saturday, June 6th. The Raiders use their air attack to move quickly into the red zone. Taking advantage of the pace, Portland is first to score. A defensive turnover gives the Raiders a shortened field. They do not waste the opportunity and score another touchdown in the first quarter. The Dogs tried to establish a ground attack. After a huge defensive penalty Cody Oakes finds Tobi Seim in the end zone. Bellingham narrows the lead.

The Bulldogs start the second quarter with a long strike to wide receiver Kyle Redmond. A Raiders' penalty puts Bellingham in the red zone giving running back Donovan Dunmore an opportunity to punch it in from the three-yard line, tying the game. Portland does not flinch as they drive down field and score on a quick seam route. Portland catches the Bulldogs off guard and throws deep after a defensive turnover, scoring another touchdown from forty-five yards out and increasing their lead before halftime.

The second half starts hot for Bellingham as they march down field using their running game. The Bulldogs finish the drive off with a bullet from Oakes to Redmond into the end zone. Bellingham's defense stops the Raiders and the Bulldogs take advantage. Feeding the ball to Redmond on three straight plays, Bellingham moves into the red zone where Oakes is able to cap the drive with another touchdown. The game is tied heading into the fourth quarter.

The Raiders waste no time in scoring again after a few long throws down field, Portland pulls out ahead. The Bulldogs claw back. Oakes finds wide receiver Douglas Miller for a big gain. The addition of a defensive penalty puts Bellingham in the red zone. Oakes finishes off the drive with a fifteen yard touchdown scramble. The Bulldogs defense is lifted by an interception from Seim and Bellingham uses Dunmore again to pound the rock. But the drive stalls. Bellingham and Portland trade possessions with neither team getting the advantage. As two minutes remain on the clock the Bulldogs face a fourth and long. Oakes finds tight end Jaa Gordon over the middle for a first down. With under a minute to go Bellingham attempts a field goal but it sails left.


Portland gets the advantage of first possession in overtime and they do not hesitate scoring one more touchdown. The Raiders end the Bulldogs chances at a win with an interception. Final score: 35-42. Click here to view photos from the game.
Posted by Jon Bergman Photography
Email ThisBlogThis!Share to TwitterShare to FacebookShare to Pinterest