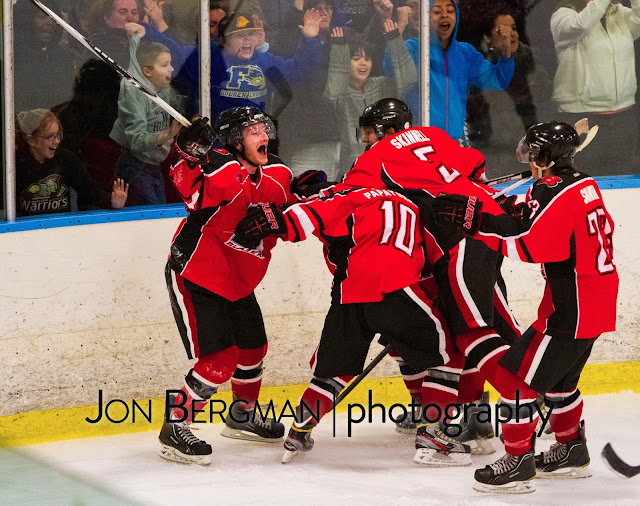 The Bellingham Blazers kept their championship hopes alive with a double overtime victory over the West Sound Warriors Saturday, March 16. Knotting the best of five series at 2-2. The Blazers took game one of the Cascade Cup in Bremerton earlier 3-0, but West Sound matched the win with an overtime victory the following evening. The series changed venues and the Warriors took game three, beating the Blazers on their home ice.

Saturday was do or die for Bellingham, needing to take the lead quickly the Blazers fired volley after volley on net in the first two periods, gaining a 3-1 advantage heading into the third. The Warriors would not fold, scoring three goals of their own, they forced overtime. After a grueling overtime period that saw West Sound out-shoot Bellingham, 18-9 shots on goal, Blazers' Goalie Cody Foster held firm sending the game into it's second overtime period. Both teams were at their limits, trying desperately to overcome the scoring drought. Finally with less than three minutes to play in the second overtime period Blazers Forward Bryce Kenning, with an assist from Kristjan Toivola, scored the final goal, ending game four and sending the series back to Bremerton. Final score: 5-4. Click here to view photos from the game.