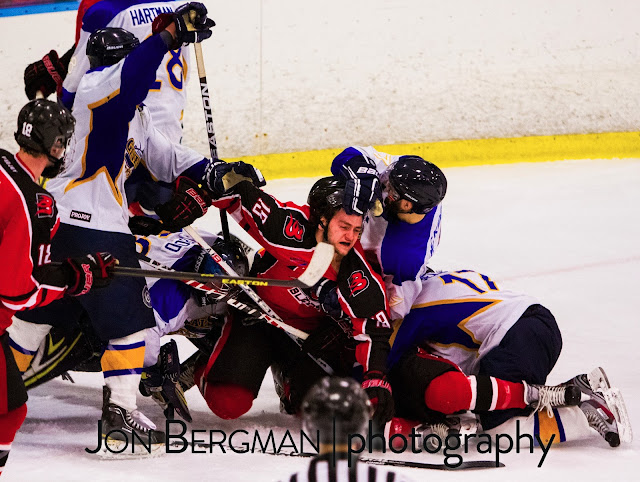 The Bellingham Blazers mark their inaugural season with their first playoff series sweep. The tension was thick in the Sportsplex arena as the Blazers held a 2-0 lead in the first round of the NOR PAC 2012-2013 playoffs over the Eugene Generals. Bellingham proved to be better prepared when they traveled to Oregon earlier, handing Eugene two-straight losses. Back on home ice the Blazers came out hot, firing in their goal in the first minute of play. The Generals would soon counter sending the match to a one-all-tie at the end of the first period. The second period was much like the first seeing the Blazers aggressively attacking the net, pushing the Generals to the breaking point. Bellingham scored once more and held the lead heading into the third. Finally the gloves came off and as Eugene lost their cool. Nine Generals saw the penalty box and their goalie was ejected after two more Blazers goals were scored, erupting in a brawl in front of Eugene's net. Final score 4-1. Click here to view photos of the game.
Posted by Jon Bergman Photography
Email ThisBlogThis!Share to TwitterShare to FacebookShare to Pinterest